If, for some reason, you’ve been introduced to the world’s best-selling author by the latest television adaptations of her work by the BBC you’d be forgiven for thinking that the books are grim and staid affairs where everyone is a suspect and most are morally corrupt. The TV versions of And Then There Were None and The Witness for the Prosecution were critically acclaimed for their realism and grit, and rightly so – they were well-written and acted productions that stripped the material back to its barest bones, revealing the hard truth and consequences (or lack thereof) of dastardly deeds – but nonetheless I prefer my Agatha Christie with a dash of spinsterly sleuthing or a sprinkle of Belgian moustache-twirling.

In Closed Casket, everyone is still a suspect and probably morally corrupt, but there’s a lightness of touch and a little wink and nod to the reader that although murder most horrid is the subject you need not be too tasked with being judge and juror of the accused; suspension of disbelief is required, and a removal from any outrage and ethical dilemma you may be faced with in a real life homicidal incident. While Christie did away with Hercule Poirot in 1975 in the novel Curtain (which was also the last novel published before her death) it should now be noted that this is an Hercule Poirot story commissioned by the state of Agatha Christie, a brand new story by Sophie Hannah, bringing Poirot back to life and over to County Cork.

The Monogram Murders was first in the new series of Poirot novels, also by Sophie Hannah, and Closed Casket takes place a few months later. Narrator Inspector Edward Catchpool has been invited to the grand Clonakilty estate of Lady Athelinda Playford, author of the hugely successful Shrimp Seddon series of children’s books, concerning a child detective and her band of disciples. Catchpool is at something of a loss as to why he has been 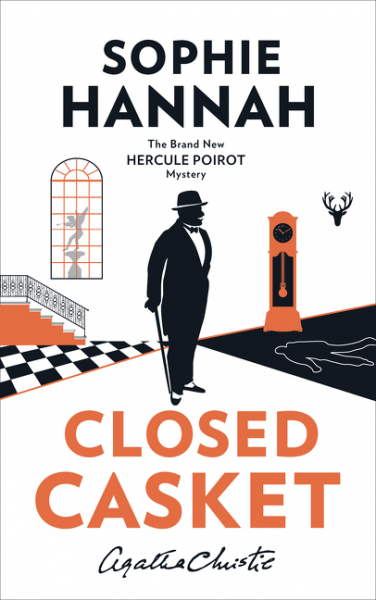 summoned to the famed writer’s home, but surmises that it’s for guidance over proper police process, something he thinks is poorly represented in the books, which are filled with bumbling constables who are endlessly outsmarted by precocious nine year olds. His suspicions are all but confirmed when it’s revealed that Hercule Poirot has also been included as a guest for the weekend. The two had worked on what was dubbed in the media as the Monogram Murders not even a year ago, so the detective is sure that Lady Athelinda is keen to pick the pair’s brains.

Of course, all is not what it seems in Lillieoak. The group collected at the house consists of two lawyers, her adult children, their respective spouse and fiancé and her ailing private secretary and his nurse. The butler and maid bring the total of persons present to thirteen – a number that never bodes well, and even less so when the great Hercule Poirot is on site. Lady Athelinda has called all those present to announce that she is to disinherit her children from her will and leave her entire estate to her devoted but dying secretary Joseph Scotcher. Pandemonium ensues, and Poirot confides in Catchpool that a murder is sure to be committed that night, so they must be on high alert. Indeed a killing does take place, but of an individual most curiously selected, and here’s where the who, what and why follows.

Convoluted and not entirely satisfying turns of events ensue, but despite its flaws Closet Casket is a fun jaunt, with many moments of levity and a number of wittily executed incidents to chuckle away to. Hannah has a mischievous style that works well within the Christie genre, and the characters have the distinctive but well-drawn qualities expected within a Poirot mystery – the dandy, the high-society ice queen, the bumbling toff and of course the servants who are nowhere near important enough to have committed the crime. While all the twists and turns, co-incidences and late-to-the-party reveals prevent the reader of any hope of solving the mystery, I would certainly read another Poirot novel from the pen of Hannah. While Christie is the master Hannah is a worthy successor and Closed Casket is a perfect tonic to the bleak realities of the real world.