The Trouble With Goats and Sheep by Joanna Cannon

It’s the summer of 1976 and the heat is sweltering. The quiet suburban avenue where best friends Grace and Tilly live is knocked out of its usual humdrum existence when Mrs. Creasy disappears, as if out of thin air. The residents are abuzz with speculation; where is she, why did she leave, is she gone for good? Married into the estate, Mrs. Creasy has become a friend and confidante to more than one of them, and there’s more than one reason for her to either come back safe, well and happy or to stay gone for good.
Grace and Tilly, ten years old and eager to fill their summer holidays with adventure, decide to investigate, and bring Mrs. Creasy home. Each neighbour is put under scrutiny – fidgety Mrs. Forbes and her domineering husband could well have something to hide, Mr. Creasy could be faking his deeply agitated husband routine, Mrs. Morton, who they sit with in the afternoons, isn’t a likely suspect but could be hiding something, chain smoking Mrs. Dakin is a busybody who likes to know everyone’s business; the list goes on. Until it reaches Walter Bishop.
Bishop is the loner of the estate, treated with derision by the adults although they refuse to tell the children why. As the story goes on it jumps from Grace’s first person narrative back to the winter of 1969 and an incident that the entire neighbourhood was involved in. It’s here where the story gets more heavily layered and first time author Joanna Cannon knits together a complex tale of suspicion, mob rule and what it’s like to be different. 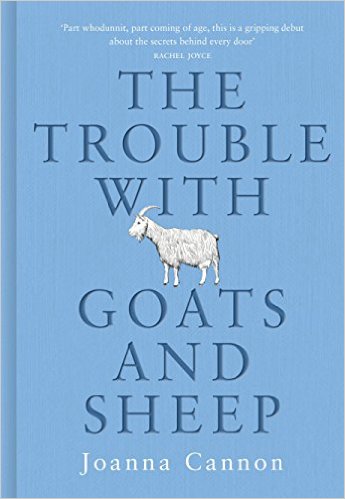 It’s a very well developed, funny and moving novel, with a great insight into 1970s English suburbia. The characters on the street are in turn seen through the exaggerated eyes of the children and then through their own points of view to the events that happened nine years later, effectively looking at the nuances of a community’s hopes, fears and flaws. The Walter Bishop character is a periphery one; his otherness causes concern for a people who want to live perfectly ordinary lives, and any mishap or incident that threatens that existence is attributed to him.

It’s an interesting insight into group mentality, and how people can be made easy targets of. A strong character backed up by others can easily become a bully, and for those of weaker dispositions it’s often easier to let them target someone else for fear of taking their place for speaking up. Grace is of the age where popularity is king and has begun to desperately seek the attention of the older, cooler girl on the street. Neither she or Tilly are particularly liked at school and this is beginning to get to her although Tilly is content as she is, much more quietly comfortable in her own skin. When Grace shamelessly abandons Tilly for a chance to gain Lisa’s favour it’s a subtle reminder that seemingly slight acts can be extremely damaging, and this is reflected in the behaviour of the adults, who should of course know much better.

Cannon weaves the story expertly, despite this being her debut novel. Coming from a small town in north England, she left school at the age of fifteen with one O-Level but returned to education in her thirties, eventually becoming a doctor specialising in psychiatry. She has an obviously inquiring mind, and her previous life doing jobs like bartending and pizza delivering, paired with her studies into the human mind have given her a great insight into the psyche which is evident in the book. It is very apparent that hers is a name to watch, and it is no surprise that she’s currently working on her second novel. If you’re after something to sink your teeth into and get you thinking, with a large cast of flawed, all too real characters, look no further than this.

First printed in The Tuam Herald on 1st June 2016