What do you get when you cross a convent, a Caravaggio and a collective of seven Irish authors? A crime caper with an abundance of cliffhangers, a plethora of twists and a deluge of turns, that’s what.

Devised by popular novelist Peter Cunningham with the encouragement and help of his friend Maeve Binchy, the concept of a comedy thriller written in tandem by a number of authors was conceived in 2010. It has come as a surprise and a delight to fans of Binchy, who died in 2012, to have a final work by the late author to devour – but Light a Penny Candle it ain’t.

The story goes like this: a recent novice is jostled one still summer’s night from the late-night thoughts of her former life, by the sound of a back firing car engine. Curious, but not alarmed, all remains relatively well until the morning, bar her pesky guilty musings, when she and the four other nuns living at Doon Abbey discover that their sole source of income has been stolen from right under their noses.

A painting by Caravaggio, it seems like an impossible theft but fortunately the recent novice is a former detective who after six months in the convent is ready, willing and able to get on the case with the help of young librarian Sister Mary Magdalene. They set forth with a new wardrobe acquired from the local bargain basement and the freedom to light up a cigarette to track down the culprits, in the convent’s clapped up old car. 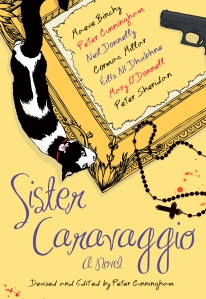 As well as coming up with the idea Cunningham also takes on a chapter and has edited the completed work. Each other writer has control over a chapter; Cunningham having given them guidance as to where the plot was to go, but free reign as to how they were to take it. Which writer wrote which chapter has been kept a secret, providing another layer to the mystery for the reader. Being woefully unfamiliar with the work of the contributers, except for (of course) Maeve Binchy, it’s not a mystery I will be solving on a more in-depth re-read, but for others I’m sure it would add to the fun of it all.

Because that’s what it is, fun. It’s not a work to be taken seriously, being a bit of a rollercoaster of a read. There’s a touch of a creative writing group exercise about it – you’ve played the game, where one person starts with a sentence and the next continues and so on, usually taking the story in a ridiculous direction. That’s what happens here at times, and so it’s not easy to predict where a plot point is going to go, where in usual circumstances the plot point at hand would be used solely to drive the main story along.

The idea is an ambitious one, and hanging the story of two young nuns being released from their enclosed order to solve a mystery on the pens of seven different writers just doesn’t quite work. The very nature of a writer’s job is solitary, and each one in this instance tugs and pulls as to what part of the story they want to focus on, leading to what becomes a rather plodding pacing and a disconnected feel. The writer of Chapter Four gives great descriptions of food throughout their section (perhaps he or she was on a diet? A clue!), and the minor characters, like the elderly twin sisters, the misses Hogan, are pretty much devoid of any depth or believability.

At times it feels like you’re reading someone else’s “solve your own mystery” book, like a second hand one that’s been picked up for €2 with all the other options scribbled out. But funnily enough that’s what gives it its charm. It’s a light-hearted jaunt, and some of the revelations and resolutions of each bizarre turn prove to be head-scratchingly brilliant.

Although it touches on Dublin thuggery and organised crime, not to mention hired guns and gruesome murders, the only controversy awarded to the religious world in which the novel is set is the enigma surrounding the whereabouts of former head nun, Sr. Winifred Superior. In this time of strife within the Church, with their many problems and decreasing numbers but joining holy orders and identifying as Catholic it appears that the world in which Sister Caravaggio is set is not one that we live in.

The writers involved are an eclectic choice. Cunningham himself is well known as an award winning writer of novels set in Waterford who also write crime thrillers under the pseudonym Peter Wilben. There are two leading figures in Irish theatre on board, Neil Donnelly and Peter Sheridan and writer of crime novels by night (as Cormac Miller) and professor at TCD by day Cormac Ó Cuilleanáin make up the male contingent. Éilis Ní Dhuibhne, award winning writer of childrens’ books and Mary O’Donnell, novelist, poet and lecturer at NUI Maynooth join Maeve Binchy on the women’s team. There is really little to distinguish gender within each writer’s section, let alone expertise in crime, thriller, women’s or children’s writing, who wrote what doesn’t really matter in this instance, it’s a group project where no one takes centre stage.

Interestingly though, a number of the writers involved are members of Aosdána, and proudly so. Another artist’s collective, the Aosdána is a group into which you must be invited, and has drawn some criticism for being elitist and political. But it has a purpose in reminding people of Ireland’s strong cultural leadership in world Arts. Projects like Sister Caravaggio, though by no means an accurate representation of individual styles introduces new audiences to new writers in an interesting and creative way.

First Published in The Tuam Herald on 3rd December 2014